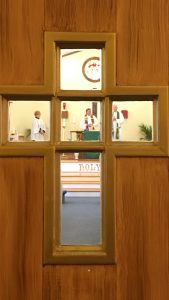 Lay Eucharistic Ministers (LEM’s) and Lay Readers assist Father Don in the service.  They process with the crucifix at the early service and read scripture, and lead the congregation in psalm readings, the Nicene Creed and Prayers of the People at the pulpit and by chalicing during communion.  LEM’s are robed and seated in the front pew, whereas lay readers are in their regular dress and come up from their pew seat to read.  LEM’s and readers serve at their preferred service.  Contact Father Don if you would like to serve in either role.